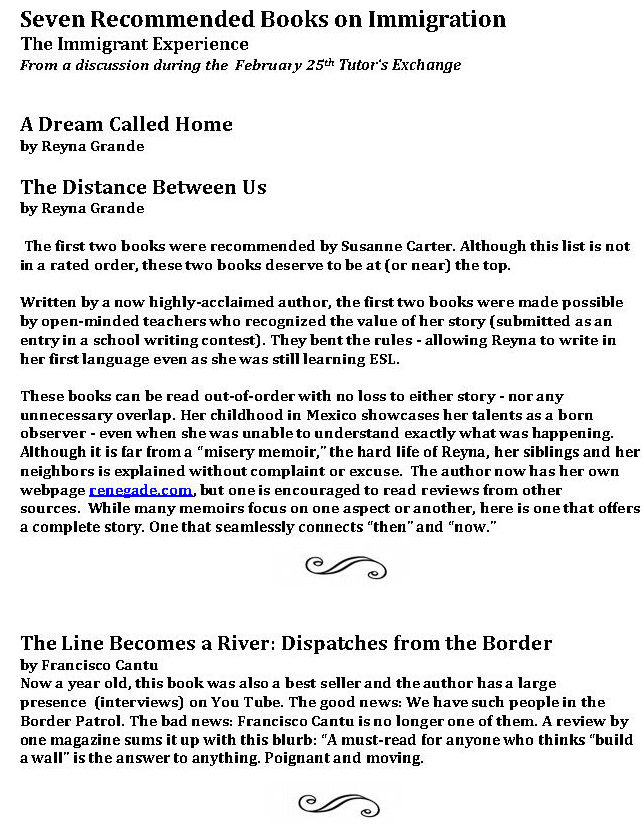 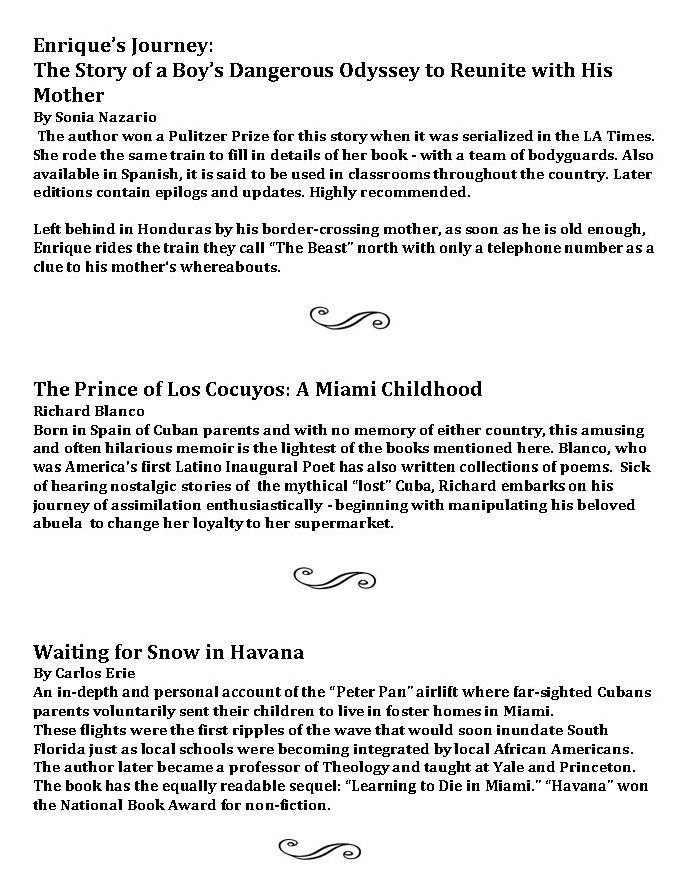 It?s fast approaching the first anniversary of my introduction to the family I shall refer to as the Maldonados. I had been tutoring a diverse group of English learners in one-on-one sessions when I was asked if I could take on ?just one more.? This student was deemed a ?special? case. More often than not, these cases turn into adventures.

Soon I was introduced to ?Jay.? Jay was a shy sixteen-year-old newcomer who had only been in-country three weeks. I had met his aunt and her husband and had found them both possessing the traits of curiosity, dedication and persistence. These are ?the big three? in language acquisition.

What I wasn?t prepared for was Jay?s age. Up until that moment, my students had all been adults. But since I had once supervised twenty-three high-school students working in the medical center of a major city, I took the chance.

I?m sure Jay had misgivings of his own. These probably included the risk of being seen in the company of a gray-haired person obviously not a relative.

I asked him about his goals and was pleasantly surprised that he had arrived with not only a ?Plan A? but a ?Plan B? as well. He stated that he wanted to learn English by his birthday, which was a little over five months away. Based on his monosyllabic answers, I thought this goal fell somewhere between ?unlikely? and ?overly optimistic.? It turned out I was committing the classic mistake of underestimating a determined pupil.

Since Jay was in high school, our initial afternoon lessons consisted of sorting through words and phrases he had acquired earlier that day. Some days the pile of ?inappropriate? words would nearly equal the ?useful? pile.

The library where we held our sessions was relocating and while the new building was being finished, we were forced to hold classes at a well-known fast-food restaurant a short walk from Jay?s high school. This not only saved time, but also offered? a ?real world? environment.

I encouraged him to order his own food to get used to hearing terms like ?whatcanigetya?? and ?haveagoodone.? But when he started asking the counterman for the correct pronunciation of menu items, I had to step in to keep the line moving.

Jay also had an uncanny ability to eavesdrop on tables several feet away. Frequently he would ask the meaning of a word or phrase unrelated to our lesson. When I asked where he had heard that, he would reply: ?that guy over there.?

When I would explain a word by substituting its Spanish equivalent, he would laugh at my ?cave man? accent. I told him he spoke ?Frankenstein? English – teasing terms we still use today. For a ?shy? person, his mirth was unrestrained – sometimes causing panicked looks on our fellow diners? faces.

In Spring, Jay?s Uncle Moises arrived and I sensed Jay?s pleasure in having a slight edge over his uncle?s passable, but hesitant English. With the arrival of summer, Jay returned to his Caribbean homeland and I feared the two-month hiatus would be a setback.

By the start of the new school year, I had four family members in my twice-a-week class and when Jay returned, we set up an additional two-hour class on Saturday afternoons ? exclusively for the family.

Since Saturday classes are ?family members only,? ?I let them choose the subjects. Grandmother Maldonado always requested grammar, while her daughter Luciana favored short stories. Luciana?s husband ?Enrique? was consumed by economics and demographics. Uncle Moises was fond of contemporary stories which we read aloud. Collectively, they all loved English idioms and gobbled them up like treats.

Under the watchful eyes of his family, Jay morphed back into his serious student role – even donning black-framed glasses to complete the look. On Saturdays he?s ribbed by his uncle, defended by his aunt and gets a serious (but not stern) appraisal by his grandmother.

Jay?s tutoring sessions are scheduled before other classes and he often remains in his seat, as the new class arrives. He gives enthusiastic answers when he knows them but remains silent when he doesn?t.

His interest picked up one day with the arrival of four Brazilian students. He?d give ?a bemused smile from time to time ? later telling me that their Portuguese sounded like ?mispronounced? Spanish.? After a few impromptu lessons from the Brazilians, Jay?announced that Portuguese will become his third language. I don?t doubt it.

In addition to their lessons, Luciana and Enrique have also enrolled in a local junior college while Moises and Jay have found the time to volunteer. The uncle has become a technical assistant while Jay mentors elementary students in math. As he puts it: ?In your class, I am only ?Jay,? but in the class I mentor, I am ?Mister Jay.?

Having spoken with other tutors on their experiences, the consensus seems to be that our country is strengthened by this diverse infusion of new blood. It has always been our strength and it?s my particular luck to be able to welcome these exceptional people. America has received a bargain with the Maldonado family.

On April 30, English conversation classes resumed in their new meeting space at Clearwater East Community Library at St. Petersburg College.? The library is located at 2465 Drew Street in Clearwater, and classes meet on Mondays from 6 pm to 7:30 pm. 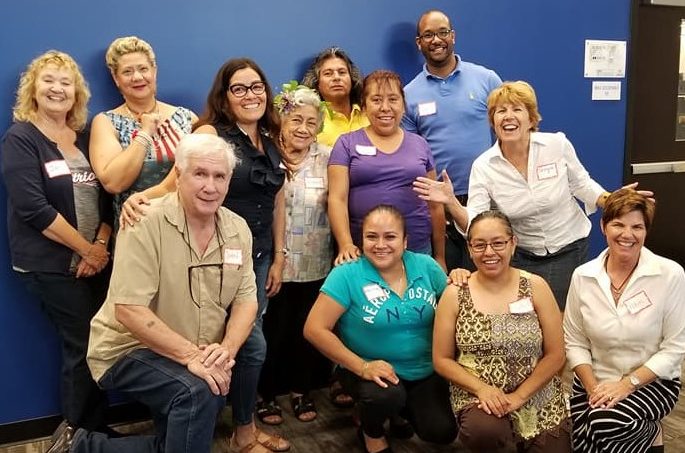 Classes had been on hiatus since mid-February, so it was a warm reunion for students and tutors and a welcoming event for newcomers.? The class is led by tutors, Jan Demers (back left) and Robin Pitchford (front right).? Tutors are welcome to visit any class.? We have many students who are eager to work, one-on-one or in a small group, with an LCUP English tutor. 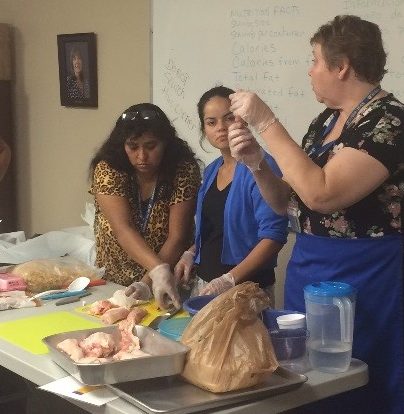 We had another awesome night at the Hispanic Outreach Center! We made cornflake-breaded chicken and orange-glazed carrots. It was a hit!

Chef Donna introduced us to some great money-saving tips like using canned juice concentrate rather than fresh fruit juices and buying the whole bird rather than just the breasts, tenderloins, etc. One of our students taught us how to properly carve a whole chicken in preparation for Thanksgiving.

Of course, the class was taught in both English and Spanish so our students bettered their comprehension skills while learning a new recipe.

Thanks again to our students and volunteers for a wonderful evening of fun learning!

In this photo, Chef Steve explains the food groups to the students while they stir-fry the vegetables.

We kicked off our second Cooking Matters for Parents class at the Hispanic Outreach Center in Clearwater. We learned how to make healthy Chinese chicken and veggies, use proper cutting techniques and choose the proper portions for the food groups. It was scrumptious! Our students LOVE the hands-on instruction provided by Chefs Donna and Steve with the UF IFAS Pinellas Extension!

Here is the best part… the class is taught in both English and Spanish to accommodate our students and help them expand their food vocabulary!

To teach adults (16 years and older) literacy skills to enhance their self-esteem, increase occupational and social opportunities, and enrich lifestyles.

A copy of LCUP's official registration and financial information may be obtained from the Florida Division of Consumer Services or, by calling toll-free 1-800-435-7352 within Florida. Registration does not imply endorsement, approval or recommendation by the State of Florida. For more information about LCUP's mission, legitimacy, impact, reputation, finances, programs, transparency, governance, and more please go to GuideStar and enter Literacy Council of Upper Pinellas.